On December 4, 2019, the Authority approved implementation of a five-year “zero-fare” demonstration project. The project went into effect on January 1, 2020. Due to the COVID-19 pandemic and the subsequent disruption to our service, Intercity Transit will suspend fare collections as authorized under Resolution 03-2019 on Fixed-Route and Dial-A-Lift for three additional years, beginning when the General Manager determines Fixed-Route and Dial-A-Lift services have returned to the service levels we provided in March 2020, or until January 1, 2028, whichever is later.

Learn more about zero-fare service and how the Intercity Transit Authority reached this decision below.

What are zero-fare transit systems?

Zero-fare transit systems collect no fares from passengers. Some agencies refer to this as “fare-free.” In this case, however, fares would be “pre-paid” through sales tax revenue.

Why did Intercity Transit consider becoming a zero-fare system?

Intercity Transit made a commitment to the community after the passage of Proposition 1 to fulfill nine community-defined priorities, including making fare collection more efficient and integrated with peer transit systems. After careful review of a number of different options, the Authority determined that zero-fare offers the most economical, effective and fastest way to deliver the transformational service voters wanted.

What are the expected benefits of zero-fare service?

Zero-fare transit systems report many benefits. Going zero-fare increases ridership which in-turn improves the environment and reduces congestion. It enhances access and equity making communities more livable. Eliminating the fare reduces barriers both for those individuals that can afford to pay as well as those that cannot. And zero fare makes boarding easier and faster which reduces travel times for all.

Yes, many other options were considered including magnetic swipe cards, contactlesss RFID cards, mobile flash passes and other new technologies. Many existing and potential new riders asked us to integrate with the ORCA card which is used by transit systems in Pierce, King, Snohomish, and Kitsap Counties.  Regional integration eliminates the need for travelers to utilize multiple fare collection systems. A zero-fare system achieves the same objectives as multi-system integration at a much lower cost for Intercity Transit. We also discovered the ORCA card is in the process of being replaced. The newer version, ORCA II, won’t be available to us for approximately two to four years. So at this time, there is no regional fare collection system we could migrate to. In addition, we found that investing in the capital and the operating expenses of a new fare collection system would cost us more than we were going to collect in fares. That’s not a good value proposition.

Why did Intercity Transit considering moving to zero-fare when it did?

With the passage of Proposition 1, Intercity Transit has been purchasing new buses to replace buses that have been used beyond their expected service lives. Because of this, we needed to decide whether to have these buses built with or without fare boxes. In addition, the fare boxes we currently use are obsolete. Not replacing that old technology allows us to avoid those expenses and invest those resources in service enhancements.

How can Intercity Transit afford not to collect fares?

Fares account for less than 2 percent of our net revenue. After considering the capital and operational costs of a new system, the difference is negligible. The opportunity to offer faster service, increase ridership, improved access and equity is a far better investment.

Will Intercity Transit have to cut service if it doesn’t collect fare revenue?

No. Intercity Transit is expanding service per the mandate voters approved last year. In fact, after accounting for the costs associated with fare collection, fares amount to less than 2 percent of total annual operating revenue. That amount is not enough to impact service.

What are the potential drawbacks, and what is Intercity Transit doing to prevent them?

How long will the project last?

We expect the pilot project to last five years. This will provide enough time to promote our service and measure the impacts of moving to zero-fare. However, the Authority may decide to end zero-fare if needed. Alternatively, if zero-fare proves successful over the life of the demonstration, they may decide to get rid of bus and Dial-A-Lift fares permanently.

What will happen to the revenue Intercity Transit collects from prepaid pass partners?

Intercity Transit collected about $600,000 in prepaid fares from local partners including the State of Washington, non-profit organizations, municipalities, and colleges. Moving forward with implementation of zero-fare means that we will no longer collect those resources. Our partners can now invest those resources toward other goals, from expanding scholarships to increasing workforce development or ensuring access to medical appointments.

How can I get more information or ask additional questions?

Are there any other benefits to zero-fare I should know about?

Yes. We previously managed a wide range of fares, passes and programs (see image below). With zero-fare, our customers and our drivers no longer have to spend the time making sure that have the correct pass, sticker or dollar value, speeding up travel.

Another incredible benefit is the opportunity to recruit new businesses to our area. This means greater employment opportunities and adds dollars to our economy. 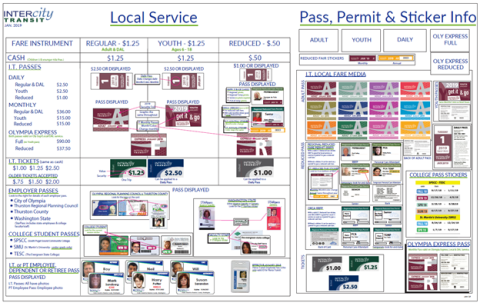